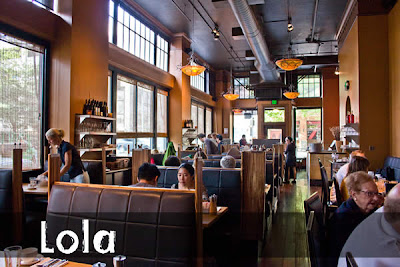 My husband and I recently celebrated our 10th wedding anniversary with our first ever trip to Seattle.  Until then, we had been living in eastern Washington for seven years and had yet to make a trip over. We justified our eastern Washington seclusion by saying the four hour drive would be too long for the kids.  No excuses however justified keeping ourselves from the wonderful sites and tastes we experienced while we were there.

Our very first evening in Seattle, we dined at Tom Douglas' restaurant Lola.  Tom Douglas is one of Seattle's celebrity chefs who won the 1994 James Beard award for best Northwest chef, and he is well deserving of the honor.  Tom Douglas has four restaurants located near 4th Avenue and Virginia in Seattle on what my husband and I termed "Tom Douglas Block," which was within walking distance of our hotel and other attractions like Pike Street Market.  First of all, all of Tom Douglas' restaurants had phenomenal websites.  I was able to check out the menu, look at photos of dishes, and see photos of the interiors of his restaurants in order to choose the perfect restaurant for our needs and wants.  I was also able to make reservations the evening prior to our visit on a website called Opentable.com which had a link on the Lola restaurant webpage.

Since we knew we would be a little tuckered out from our long drive, we opted for an early 5:30 p.m. reservation and were treated to an empty, quiet restaurant with an extremely attentive, very professional, and well trained waitstaff.  By the time we left around 8:00 p.m, the place was bustling and energetic, but for a good hour, we had the lovely restaurant to ourselves which was such a nice treat.

The menu was diverse and creative.  Since it was conveniently separated into different categories, my husband and I decided to share everything so that we could try one thing from each category. 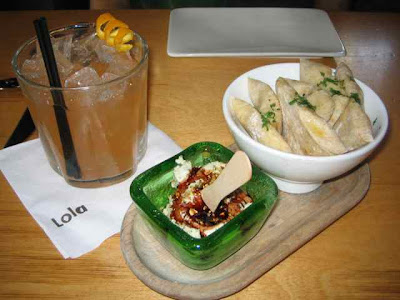 To begin with, we tried the Skordalia which is a garlic spread served with Lola's freshly made pita. 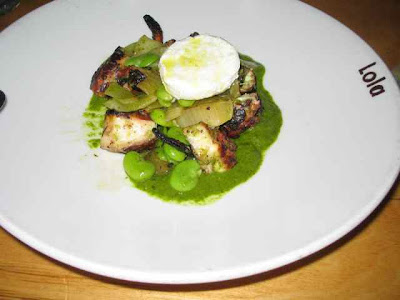 Next, a grilled octopus salad with fava beans, basil and fresh yogurt cheese.  The juxtaposition of the fava beans with the basil was absolutely wonderful.  The octopus was phenomenal.  The waitress told us that the octopus is marinated for hours before grilling.  It gave the octopus almost a meaty consistency. 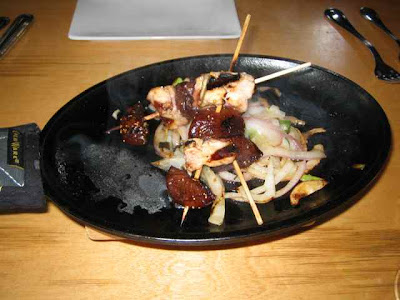 Next, we tried a Haloumi cheese and fig kabob served atop caramelized onions and deglazed with ouzo. This was my favorite dish of the evening.  The cheese had a meaty, spongey texture which contrasted nicely to the creamy fig.  Also, the saltiness of the cheese was a nice complement to the sweetness of the fig.  The ouzo gave the whole dish a slight anise flavor which was wonderful. 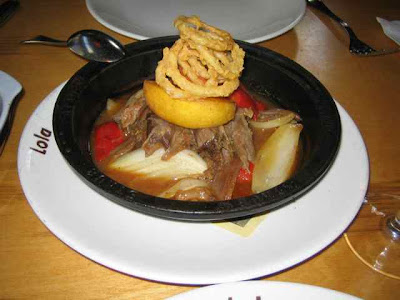 This was a tagine of young goat served with cumin spiced peaches and roasted red peppers.  The meat was incredibly tender and the cumin with the peach was a flavor explosion. 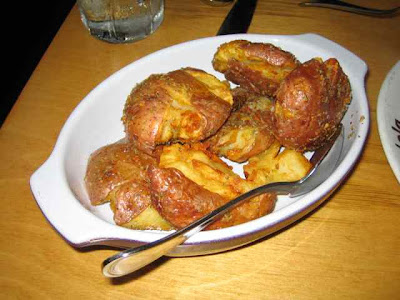 After all of the wonderful dishes we were trying this night, it is hard to believe that a lowly potato could hold its place among all of the superstars.  However, aside from the cheese and fig kebab, this was my second favorite dish of the evening, smashed garlic fried potatoes.  Starch + garlic + oil = crispety, crunchety heaven. 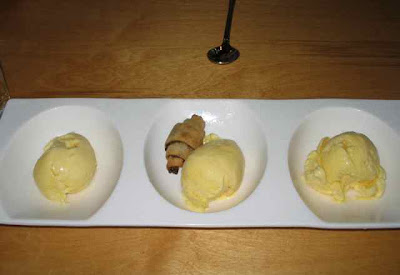 To cap the evening off, we tried the saffron ice cream.  I just loved the simple presentation of this and the wonderful dish it was served on.  The ice cream was very delicately flavored and I'm sorry to say, after our garlic spread and the garlic smashed potatoes, it took us quite a few bites in order to discern its flavor, but it was a creamy and wonderful way to finish the dinner.

Although our kids probably wouldn't yet appreciate the menu at Lola, with seven restaurants in Seattle (including one dedicated to pizza), I know our next trip to Seattle will include a stop at a Tom Douglas restaurant.

Email ThisBlogThis!Share to TwitterShare to FacebookShare to Pinterest
Labels: reviews

That looks like a very enjoyable meal! I love the look of that potato dish too, and the octopus dish...yumz!

Oh, gorgeousness! I think my favorite would've been the same as yours--I have a special spot in my heart for figs and cheese. Mmmmmm.

We live in Seattle now and I haven't been to any Tom Douglas restaurants--probably out of our price-range and kid-range! Ha! Well, next year is our 10th so maybe then.

That potato dish has gained my heart :-)) Looks so tempting!
Nice to see you back. :-))

Happy anniversary to you both. Thanks for taking us along on this lovely meal. The fig and Haloumi cheese kabob is very interesting with the ouzo. I have some Haloumi in my refrig and a bottle of French Pernod (anise flavored as well). I just might have to give this a try.
Sam

Happy anniversary! A lovely meal at Lola! We ate there a while ago and really liked it as well.

What a wonderful review. you photos are perfect. We went to Seattle a couple years ago and fell in love with Pike Place Market; I hope you got a chance to visit it.
Rita

I do believe your two favorites would be mine as well! What a nice review! I'd love to try this spot the next time we're in Seattle.

From the Kitchen said...

I'm speechless and hungry! What a spectacular meal you had. Seattle is such a wonderful place. It has been many years since we've been but have happy memories.
Happy 10th anniversary. May your future anniversaries be just as delicious!

Seattle is such a great city to visit for a special anniversary celebration. I'm sure I would enjoy every course of your lovely meal. Happy 10th Anniversary.

What a great blog!

This looks so delicious!

Have a nice time!
Paula

Happy Anniversary to you both!!

Congrats & I see you celebrated it very well with a lovely trip & a nice restaurant!!