First of all, I want to give a big thank you to all of you for reading my blog!  I was able to post every day in February and your lovely comments kept me motivated!  I had so much fun doing it, I plan to post every day in March as well.  It wasn't easy towards the end as I was actually in Santa Fe, New Mexico for a few days last week.  Thanks to the feature on Blogger that allows you to post things in the future, I was able to meet my goal.  I'm feeling a little rusty as I type this.  It's been a few days (for me) since I've posted, but I thought you'd enjoy some pictures of Santa Fe.  It was so good for me to get away.  My hubby had a work conference so I was able to spend some quality girl time with myself (the kids were at grandma's) walking around the Plaza in Santa Fe and getting a massage and facial at the spa at our hotel.  Jealous?  I haven't even gotten to the food part yet! 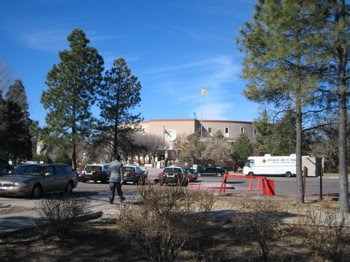 My first morning in Santa Fe, I wandered.  I happened across the state capitol building.  It isn't much to look at from the outside, but I took a little tour and it is quite large inside.  They were having "Las Vegas, New Mexico" days in the lobby, so the place was just jammed pack with police, firefighters, school principals, etc. all from Las Vegas, New Mexico.  In addition to that, they were having some tribute to soldiers from the Vietnam War, so retired veterans were all around as well as members of the Lyons Club.  After my little tour, my tour guide was preparing to show 120 elementary school kids around.  I would not want to trade jobs with her! 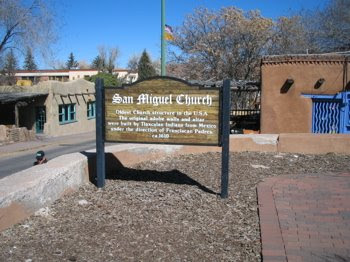 San Miguel Church, just off of the Plaza, is the oldest church in the U.S.A.  There is evidence in the foundation of it being built on an Indian temple site from the 1300's. 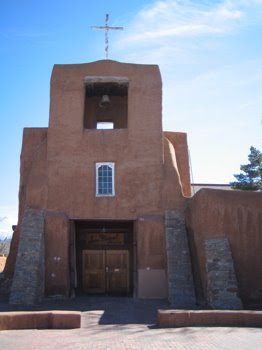 The outside of San Miguel Church 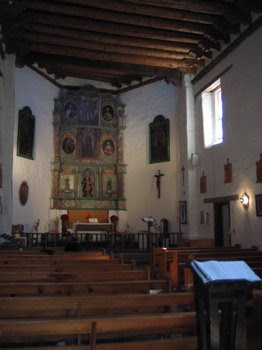 The inside of San Miguel Church 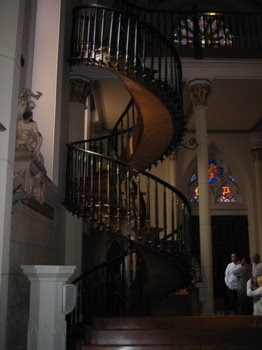 I cannot remember the name of this church right now (San Lorenzo?).  It's claim to fame is this "miraculous" staircase.  It's miraculous because it defies the laws of physics by making two complete revolutions without any external supports.  I thought it was miraculous that they actually got $3.00 from me to come see the darn staircase!
Okay, enough of the travel shots.  I know what you're really interested in seeing...the FOOD! 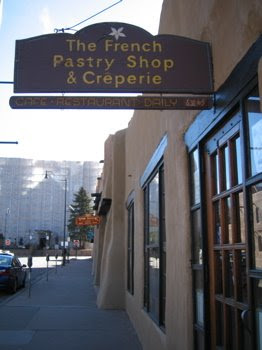 My first breakfast in Santa Fe.  This was a little shop right off of the Plaza that I happened to wander into.  They made all of their pastries and breads on site.  I steered clear of the pastries in favor of their crepes though.  I actually went back there with my hubby our last morning in town as well! 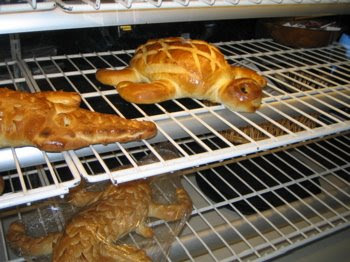 The animal breads...aren't they cute?!  I wouldn't want to eat them for fear of ruining them! 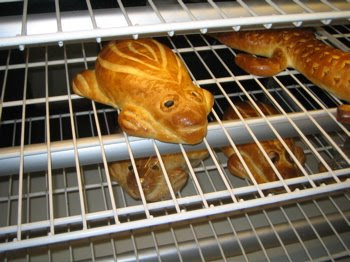 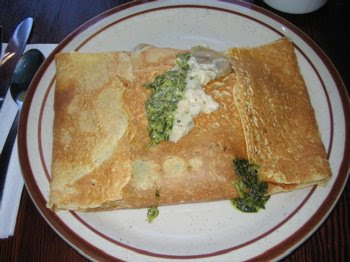 My first breakfast in Santa Fe, a mushroom, chicken, and spinach crepe.  Less than half was plenty and the waitress was very good at refilling my coffee. 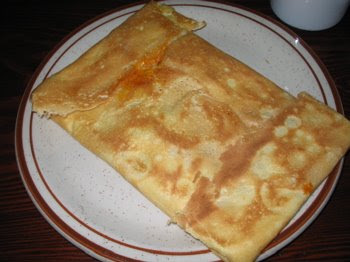 My last breakfast in Santa Fe at the same creperie.  A chorizo, egg, and cheese crepe.  Again, less than half was plenty. 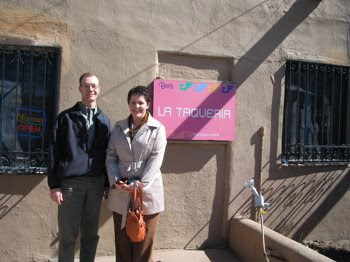 This is me and hubby standing outside of Bert's La Taqueria on one of his lunch breaks from the conference.  We stumbled across this restaurant on the backside of a church a few blocks from our hotel and it ended up being my favorite restaurant of the trip.  We sat next to a pair of fellow foodies (unfortunately the only other people in the restaurant) who took our picture. 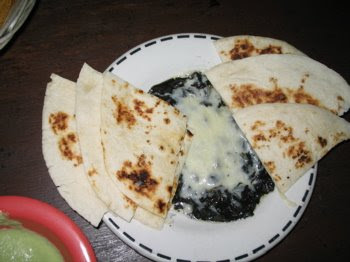 I'm not even sure what this is!  I ordered some local specialty off of the menu that they were almost out of.  They had a little bit left which they shared with us.  There were beans and green peppers in it, stewed a long time, and it had a wonderful smokey flavor. 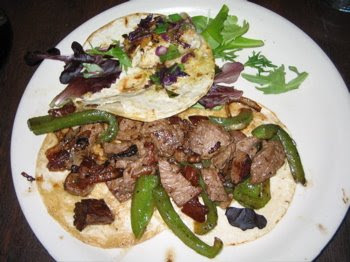 Hubby and I shared so this is a combination of the fish, beef and pork tortillas.  My mouth is watering just remembering this dish! 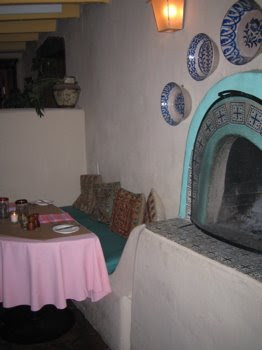 Friday night dinner was at a restaurant called the Pink Adobe.  Very cute atmosphere.  We sat in this little room next to a fireplace where the waitress would put another log on the fire every time she passed. 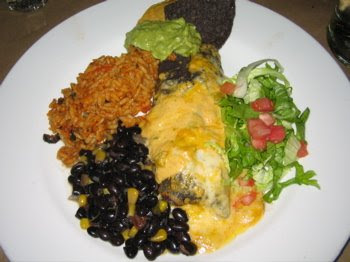 We shared the crab enchilada.  Yes, this is the portion that has already been halved! 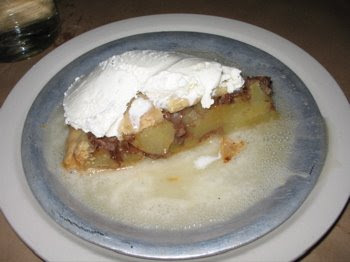 The Pink Adobe is famous for its apple pie.  We had to taste it.  The rum sauce it is floating in was fabulous. 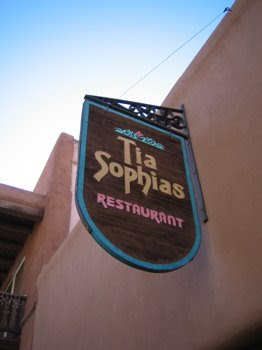 Saturday morning we again stumbled across this restaurant, Tia Sophias, off of the Plaza.  There was a little bit of a wait so I casually started chatting with someone waiting next to me.  "Have you been here before?" I ask.  "Oh yes," was the reply, "I come here every week.  In fact, I've been here twice this week!"  How can you go wrong with an endorsement like that!  We got there at a good time as this place soon became packed with locals.  We were seated relatively quickly, oh it was so good. 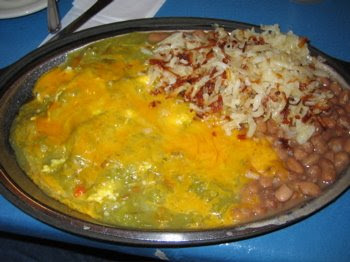 My breakfast, the huevos rancheros with rice and beans.  The beans were a PERFECT accompaniment to the eggs.  The green chili sauce was spicy and delicious. 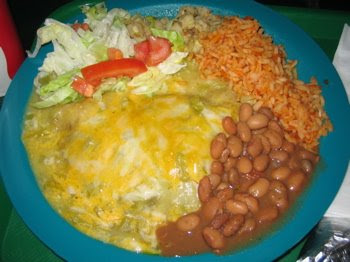 Lunch was just okay at someplace called The Burrito Bar (?).  Actually if we had been in town here we would have considered it exceptional, but in comparison to all of the excellent restaurants we ate at, it was my least favorite.  A chicken and avocado burrito with green chili on top. 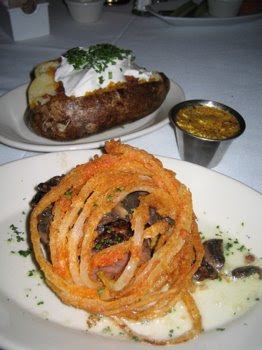 Our final dinner in Santa Fe was at a place called The Bull Pen off of the Plaza.  Hubby and I split again (yes, this is the half portion that has already been split!) a steak with sauteed mushroom, crispy onions, and green chili floating in a pool of sizzling butter.  We split a loaded baked potato and a side of au gratin spinach (which was more like a little bit of spinach floating in a pool of melted, gooey cheddar cheese)
Santa Fe was beyond fun for me to go to.  Reliving the trip through food, I already feel myself going back to "vacation mode" and relaxing.  I would totally recommend going if you are able. Now I need to get out my Rick Bayless cookbook and start trying to recreate some of these dishes!
Posted by Joie de vivre at 5:30 AM

What an awesome trip! I'd love to go to NM oneday...and ditto on Rick Bayless, he's amazing :) thanks for all the great pix!

Thanks for sharing! I love the animal breads.

It sure looks like you had a blast.. thanks for sharing it through your photos!! I am looking forward to your creations!!

Oh, my the food and architecture of the church is amazing. My tummy is grumbling now:( I love Spanish mission style.

I think I will make a steak with crunchy onions for dinner!

Welcome back and thanks for thinking of us and post-dating some entries.

Thank you for sharing your pictures. Sounds like you had a fantastic time! I love those animal breads!

Why yes, I am jealous. Heh. Plus I want that chorizo crepe!

How interesting about that church. I had no idea. Oh, that yummy food all melted together on the plate. It looks so great! Crab enchilada?! That would have topped my list and I love that turtle bread. So glad it was a fun trip!

Looks like a great trip! I love the animal breads...how amazing :)

What a wonderful trip.
Oh, and all that food. So what are we going to post abut weight loss next? ;-)
I’m glad you are back and had fun and a much needed pampering.

One thing that bothered me a bit is the “There is evidence in the foundation of it being built on an Indian temple site” part. It is tragic in a way and sad how cultures instead of building side by side, build on the ruins of another.

There is NOTHING like New Mexican food. I ADORE the stuff. Wish I could eat like that everyday.

What a great trip! And it looks sunny - something I would totally appreciate at this time of year. That AND French pastries!

Oh thanks Amanda you have just brought back so many memories of our visit there many years ago, and the food, I am crying...my authentic southwestern/Tex-Mex dreams...*snif* I may have to make that for our dinner tonight, one of them!

Thank you for taking us along on your trip. Great photos of the area and the food. I've never been to Santa Fe so this was really fun.
Sam

What a trip, the food looks amazing, and HUGE! I love the animal breads. they're cool!

Looks like a great trip, love all those animal breads

You did exactly what I would do... eat Mexican food at each meal! LOL Sounds like a nice trip.

I love New Mexico! What great photos. Thanks for sharing!

Oh what fun! I love the animal breads they brought back great memories of my mom making teddy bear breads with me as a kid. I may have to make my own animal bread soon. I love that you shared practically every meal with your husband, that's the way to go. It's always too much food and it's much cheaper to split something.

Beautiful pictures. Thanks for sharing.

That breakfast crepe looks amazing! Looks like a wonderful trip!

I didn't even realize you were gone! I'm glad you were able to have such a fantastic getaway. Everything looks wonderful and I loved seeing the architecture.

The food looks great! I haven't been to NM before but I love the food from that region. Are you going to make those animal breads now? :)

Great food, that apple pie looks like a winner. And those animal breads, si golden and yummy!!

The animal breads are so cute. Too cute to eat! :)

those animal breads are so cute!

What a lovely trip & what beautiful pictures!!! Thanks for sharing this adventure!!

Good for you for being able to get away! Wow what food you got to try and the places you visited were so nice. I am jealous of you massage and facial! But very happy that you got that well deserved break!

What a cool trip! I've never been to Santa Fe, but would love to go one day. The food looks awesome.

The steak restaurant in Santa Fe is called The Bull Ring".