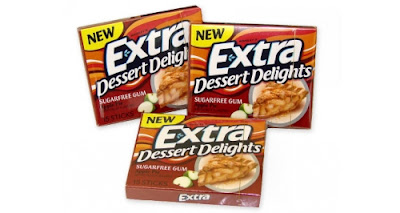 This summer, I've been struggling with my desire to eat nothing but peanut butter milkshakes (and Peanut Buster Parfaits, and Tin Roof Sundaes, you get the idea!).  I've been able to maintain my weight all summer, but nothing has been happening on the weight loss front.  Instead of getting frustrated, I've been trying to nudge some of the bad habits I've picked up in the summer back to healthier habits.  I saw this gum in the checkout aisle last week and decided to give it a try since I'm a fan of the Extra Dessert Delights Mint Chip ice cream gum.  I'm glad I took a chance, because I'm now a big fan of this Apple Pie Gum!  I know it sounds weird, and I have to say, it is a little weird, but it tastes like apple pie!  It's just enough to take the edge off of a sugary dessert craving.  I do have to say that after about one minute, the taste starts to wear off a little and it gets a little blah, so it's not a gum you want to pop in your mouth to give it something to do for a while, just for a quick taste of sweetness.  Now Extra just needs to invent a peanut butter milkshake flavor and I'll be all set!
Posted by Joie de vivre at 2:56 PM 2 comments:

Email ThisBlogThis!Share to TwitterShare to FacebookShare to Pinterest
Labels: desserts 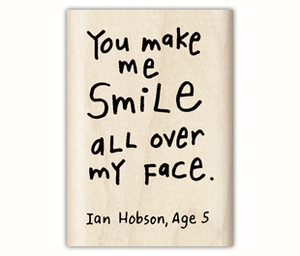 Oh my blog, how I have missed you!  I started this blog because I love food and I love to write.  Somewhere along the way, I lost my focus.  My blog started to feel like a burden.  I felt I had to compete with all of the other food blogs who took way better pictures and devoted so much time researching the backgrounds of foods and experimenting with kitchen techniques I could never compete with.  I started gaining weight and felt like a fraud writing about the French way of eating.  I felt I needed to update everyday with new recipes, yet my health and waistline were not happy with all of that food.  I needed to take a step back from my blog for a while.

During my blog hiatus, I joined Weight Watchers and rediscovered my joy of healthy eating.  I am 35 lbs down from where I was a year ago at this time and feel like I have rediscovered my joie de vivre.  For me, my food blog isn't about competing to make the most decadent dish and take the best pictures, it's about relating my joy of preparing healthy food for my family in its simplicity.  I realized I didn't have to compete with all of the amazing and wonderful blogs out there.  My blog is about my joie de vivre and a way to express myself creatively and at the end of this journey of self discovery, I think that is pretty wonderful.

For my friends and readers who have been gently (and sometimes not so) prodding me to update and post again, you will be seeing me here more often.  I can't always promise a fabulous recipe and I definitely can't promise fabulous mouthwatering pictures, but I can promise that I'll write about things, food, and experiences where I find joy.
Posted by Joie de vivre at 1:52 PM 7 comments:

Thanks to the Foodbuzz Foodie Correspondent Program, I was able to attend Savor the Flavor yesterday as a member of the media.  Savor the Flavor is a food and cooking show put on by Taste Tri-Cities as a benefit for Modern Living Services which services and supports developmentally disabled adults in the community.

As a member of the press, I was able to get into the show early to examine the layout, talk to vendors and watch the amount of effort it takes to pull a show like this off. 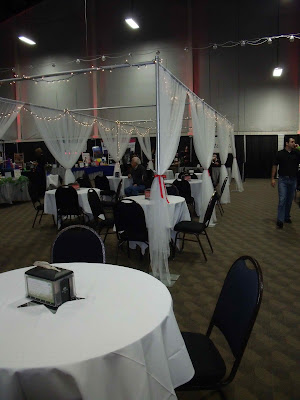 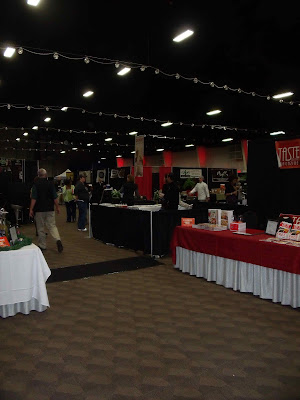 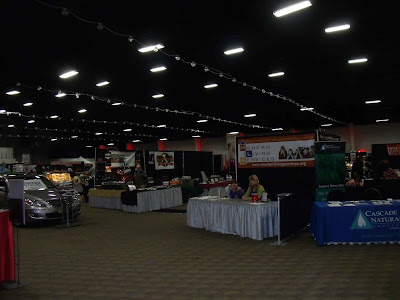 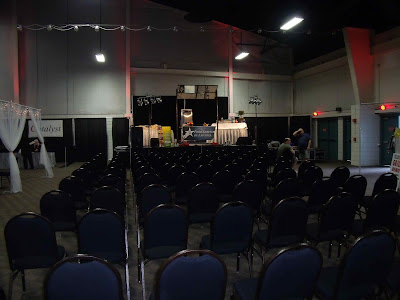 I was impressed with the layout of the show.  There were 5-6 stages set up within the space, the aisles were roomy yet there were little seating areas throughout where people could enjoy wine and nibbles.  There were lots of local food vendors and establishments represented as well.  I learned about quite a few local food sources that I was unaware of before.  My favorites were locally canned salmon which was caught on a line by fishermen in Washington, a woman who was selling natural dog chews made from naturally shed local elk antlers, as well as all of the small businesses who were out there working hard for their living. 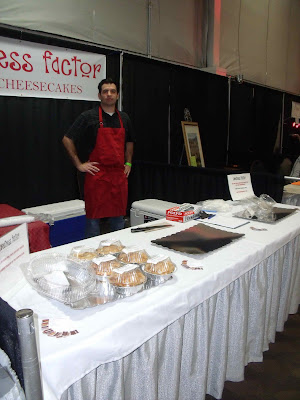 This man had a small cheesecake business that he had just started this year before the start of the Farmer's market season.  He was baking his cheesecakes out of the Pasco Specialty Kitchen which is a business that has an industrial kitchen it rents to small food businesses to help them get started. 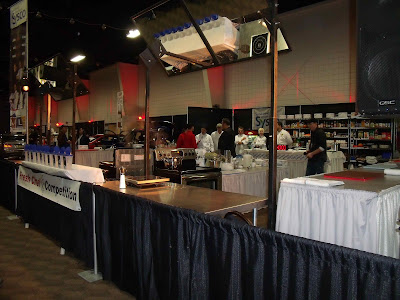 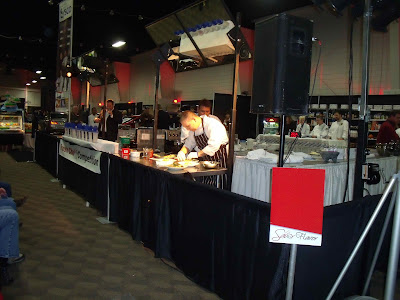 Once the show officially opened, I was caught up in the excitement of the cooking demonstrations.  The first I attended was Chef vs. Chef, a local take on The Iron Chef featuring local chefs.  It was incredibly charming.  Of the first two chefs, one was the head chef from a local retirement community and the other was a chef of a local restaurant.  Being first up, they were a little flustered, but incredibly professional and polite to their sous chefs and each other.  I was tickled that the first two front rows were taken up by the chef's family members cheering them on.  I was so enthralled by the Chef vs. Chef competition that I watched two of them throughout the day.  Here are some of the chef's finished dishes after 40 minutes. 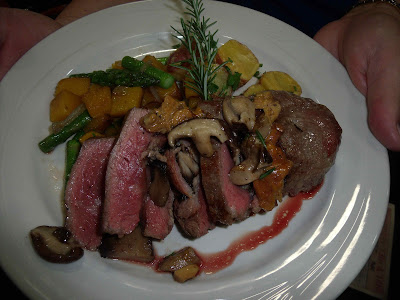 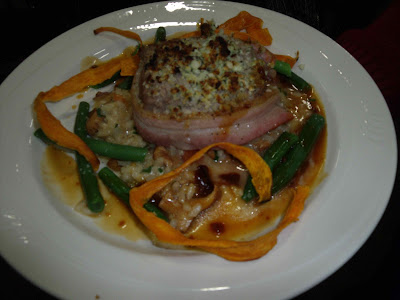 With these two, the secret ingredient was beef loin.  I thought the long, deep fried sweet potato strips were inspired! 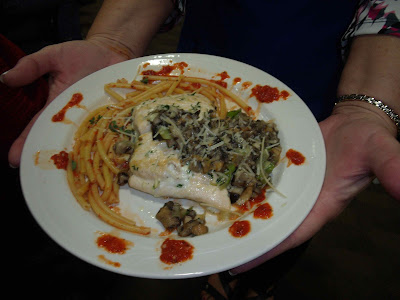 Secret ingredient:  White salmon.  I felt so sorry for the sous chef who helped make the above dish.  They didn't really have sinks, so he had to carefully drain the pasta into a small bowl.  Talk about pressure! 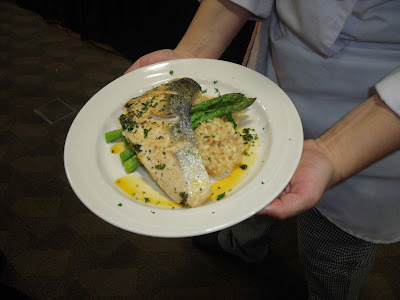 After Chef vs. Chef, it was getting to be about lunch time.  Savor the Flavor is all about trying out dishes from different restaurants.  You buy tickets for a dollar each and then use the tickets to purchase little sample dishes from attending restaurants. 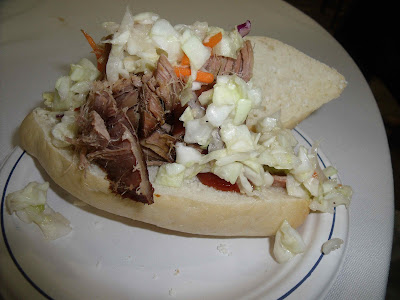 This was a mini beef sandwich with coleslaw from Jacksons, a local sports bar 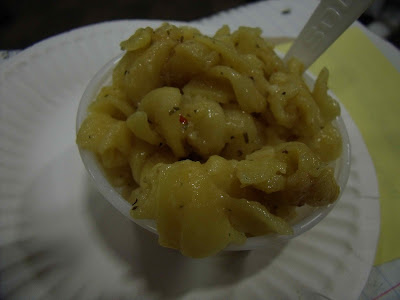 12 cheese Macaroni and Cheese from Cheese Louise, a local cheesemonger 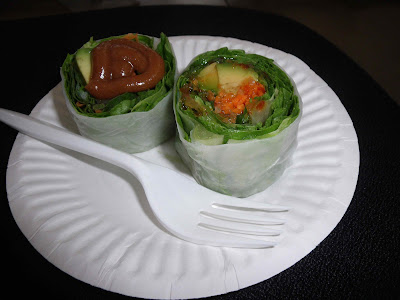 Thai spring rolls.  One of my favorite nibbles of the day!
After my nibbles for lunch, I was starting to wear out so I headed over to the "celebrity" chef stage to watch the demos over there.  The first was a chef from a local country club.  There were only about 25 people watching his show so there was lots of opportunity to ask the chef questions.  He was extremely personable and promised to e-mail me his recipes.  I can't wait to try making his hazelnut chocolate truffle tart with spiced cranberries. 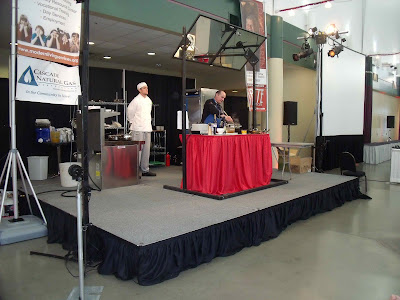 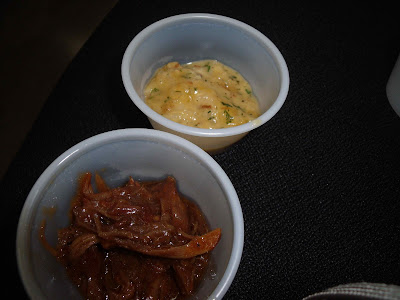 In addition to his chocolate truffle tart, he made short ribs with mushroom risotto 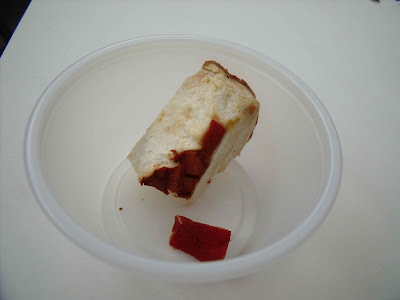 A sample of the lobster mushroom he used in his risotto.  It had a bright red outside! 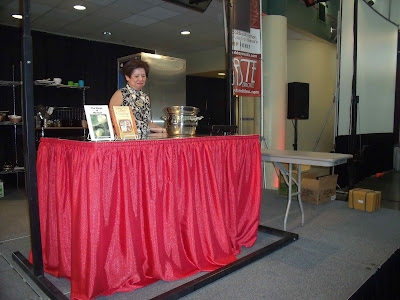 The last "celebrity" chef show I attended for the day was a local chef who owns a Thai restaurant called Emerald of Siam.  She has published two cookbooks now which she sells at her restaurant.  I bought one of them yesterday because it had the recipe for tom yum (lemongrass with shrimp) soup which she demoed. 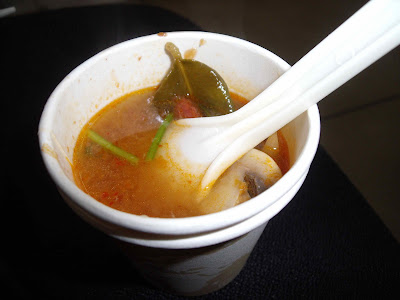 This was my favorite nibble of the day!  With my sore throat, it felt so nourishing.
Savor the Flavor was a wonderful experience and a wonderful way to discover local food sources and restaurants who are using thoughtful, loving, local and sustainable practices toward food and food production.  My only complaint about the show was the inclusion of non-food vendors such as a local hair salon, as well as vendors selling bags, make-up and home fragrances.  These really detracted from an otherwise fabulous event.
Posted by Joie de vivre at 3:09 PM 21 comments: