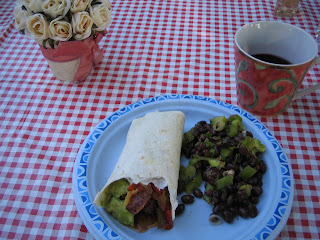 Perhaps my penchant for eating good food has gone too far (or maybe, not far enough?).  On my last blog post, I had a friend ask where I bought the freeze-dried salmon.  Blech!  When I say we eat fancy when were camping that means no freeze-dried foods!   (I must confess though that for the second morning of our camping, I did plan a cold cereal day.)  I think the secret to eating well while camping is just advanced preparation and a good storage technique for cold foods.  That being said, our most recent camping adventure sported this menu:
Friday night:  Black bean salad, Grilled Steak tacos with salsa and guacamole.  Roasted marshmallows  (pictured above sans marshmallows, served with a glass of red wine (don't tell the camp host!))
Saturday:  Breakfast:  Egg and cheese sandwiches
Lunch:  Hot dogs, chips, birthday cupcakes, leftover black bean salad
Dinner:  Beer marinated pork shish kabobs with zucchini, squash and red onion, crusty bread, White beans with chanterelle mushrooms
Sunday morning:  Cold cereal with rice milk.
My advanced preparation consisted of making the black bean salad, marinating the steak for the tacos, pre-cutting the cheese and wrapping up the eggs for the egg and cheese sandwiches, marinating and cutting the pork and veggies for the shish kabobs and putting all the ingredients together for the white beans with chanterelle mushrooms.  I then packed everything in the cooler starting with Sunday's breakfast items on the bottom and ending with Friday's dinner items on the top.  The beer marinated pork shish kabobs was definitely my favorite meal and the white beans with chanterelle mushrooms smelled as heavenly while cooking as they tasted.  Here are some of the recipes to try on your next camping adventure.
Black bean salad  adapted from Campfire cuisine:  Gourmet recipes for the great outdoors by Robin Donovan
Juice of 3 limes
2 Tbs. honey
1 Tbs. ground cumin
1 Tbs. ground coriander
1 Tbs. dried oregano
2 14.5 oz. cans black beans, drained and rinsed
2 green bell peppers
6 green onions, thinly sliced.
Mix the lime juice, honey, cumin, coriander and oregano in a large ziplock bag until well combined.  Add the beans, diced pepper and onion and toss until well combined.  Close this ziplock and then put this ziplock into another one to get it ready for the ice chest!
Red wine Marinade for steak taken from Campfire Cuisine:  Gourmet recipes for the Great Outdoors by Robin Donovan
Juice of 3 limes
1/2 cup red wine
2 cloves garlic, chopped
1 Tbs. dried oregano
1 tsp. salt
1 tsp. pepper
Mix all ingredients in a large ziplock, drop in the steak, seal the bag making sure to get most of the air out.  Put this bag into another bag to ready steak for the ice chest.
Grilled Steak tacos by Joie de vivre
After your coals have gotten hot, put the steak on the grill and grill on each side for about 7 minutes, remove steak to a plate and loosely cover with foil for a few minutes.  Thinly slice steak, put into a tortilla with guacamole and salsa.  Wrap up and enjoy!
Beer-Marinated Pork and Veggie Kabobs adapted from Campfire Cuisine:  Gourmet recipes for the great outdoors by Robin Donovan
For the marinade:
1 1/2 cups water
1 bottle beer
1/2 cup packed brown sugar
1 Tbs. dried oregano
2 cloves garlic, minced
2 Tbs. course salt
1 tsp. pepper
Mix all ingredients in a large ziplock bag and mix.
Add to marinade
1 1/2 lb. pork loin cut into 2 inch chunks
Shake bag to combine.  Seal well removing as much air as possible and put this ziplock into another ziplock to ready meat for ice chest.  Once ready to cook kabobs, thread meat chunks onto skewers with cut onion, zucchini, squash, etc that has been drizzled with olive oil.  Put on grill over hot coals!
White beans with Chanterelle Mushrooms taken from Campfire Cuisine:  Gourmet recipes for the Great Outdoors by Robin Donovan
2 14.5 oz. cans cannellini beans, drained and rinsed
3/4 lb. chanterelles, sliced
1 small red onion, chopped
1/4 cup olive oil
1 1/2 Tbs. chopped thyme
1/2 tsp. salt.
Olive oil spray
Heavy duty foil.
Mix beans, mushrooms, onion, olive oil, thyme and salt in a ziplock bag.  Seal, removing as much air as possible.  Seal this ziplock into another ziplock to ready beans for the ice chest.  When ready to cook, make a foil packet by taking a long piece of foil, folding it in half, and then crimping the two sides.  Spray the inside of the foil packet with the olive oil spray and put the bean mixture in.  Crimp the remaining side of the foil packet to seal leaving enough room for steam to circulate.  Put the packet over hot coals for 20 minutes.
My weakness and laziness in camping is definitely breakfast foods (I think it's the lack of coffee so early in the morning) so for my next post, I'm going to be researching and trying some out.  Bonne chance with the camping food and let me know if you try anything!
Posted by Joie de vivre at 12:49 PM 1 comment: 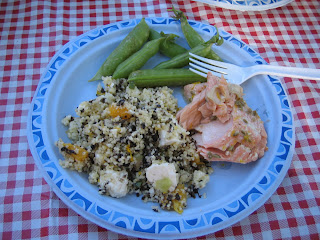 The month of July is such a busy one even though summer is supposed to be the time we slow down.  Even though it is busy with fun things, like swimming and going to the library, it is still busy.  Even our weekends have been busy with camping!  So I've decided to dedicate my July blogs to camping food.  Some people camp by eating cold cereal, stale doughnuts, top ramen noodles, chips and oreo cookies, but I prefer to enjoy the outdoors by eating well.  And I mean WELL!  Fancy well.  I don't totally skip the junk food, my kiddos have discovered the joys of roasting marshmallows and I would never deprive them of this childhood ritual of fire and gooey goodness, but for the most part, I do like to eat fancy.  Here is the menu for our most recent camping adventure.
Day 1:  Dinner:  Orange Herb Salmon, Olive, Orange and Couscous Salad, Fresh snap peas.
Day 2:  Breakfast:  Raisin Bisquits with Orange Honey Butter and Fruit.
Lunch:  Turkey Cream cheese Roll ups with red onion and cucumbers (we did have chips with this meal!)
Dinner:  Cheeseburgers, Cole slaw, Marshmallows
Day 3:  Breakfast:  Banana Pecan Pancakes, Fruit, Juice.
The picture on this blog is of the dinner from Day 1.  Doesn't this look better than sub sandwiches or even (shudder) top ramen noodles?  Because we use disposable dishes and utensils while camping, the clean up consisted of one pot, and a spoon.  You can do it, don't settle for bad food!
Orange Herb Salmon taken from Campfire Cuisine:  Gourmet recipes for the Great Outdoors by Robin Donovan
Olive oil spray
4 6oz. salmon fillets
salt and pepper
juice and zest of 1 orange
1 tsp. crushed red pepper
1 Tbls. fennel seeds (crushed if you don't like the occasional crunch in your salmon)
1/4 cup butter (1/2 stick) cut into pieces
Spray 4 squares of aluminum foil with olive oil.  Place 1 salmon fillet on each foil square.  Sprinkle the fish with salt, pepper, orange juice and zest, red pepper, and fennel seeds.  Dot each fillet with butter.  Bring the sides of the foil up around the fish and fold over to seal the package tightly, leaving room for heat and steam to circulate inside.  Cook on a grill over high hieat about 20 minutes until the fish is just cooked through.  Serve immediately.  Serves 4.
*My adaptations:  I just used one big foil packet to cook a large fillet for my family instead of cutting it in four pieces.  Also, to make cooking easy once I get to camp, I do prep in advance.  I put all of the ingredients, except the salmon, in a plastic bag before we left and put it in our cooler.  Once I started to cook, all I needed to do was heat the coals for the barbeque, make and spray the foil packet, put the fish in it, and dump the contents of the plastic bag over the fish before sealing it.  I also brought along a disposable 9 x 13 inch baking pan, inverted it and put it over the foil packet on the grill essentially turning it into a little oven.  That worked really well.  No clean-up involved in this one!
Olive, Orange and Couscous Salad from Campfire Cuisine:  Gourmet recipes for the great outdoors by Robin Donovan
1 cup water
1 tsp. salt
1 cup couscous
zest and chopped segments of 1 orange
1/2 cup chopped, pitted cured olives, such as kalamata
2 green onions finely sliced
2 Tbls. olive oil
juice of 2 lemons
salt and pepper
4 oz. feta cheese, crumbled.
Bring the water, with the salt added, to a boil in a saucepan with a lid on a camp stove.  Remove from the heat:  add the couscous, stir, and cover.  Let sit for 5 minutes.  Fluff with a fork and allow to cool  Mix in the orange segments, olives, green onion, olive oil, lemon juice, salt and pepper and feta.  Serve immediately.  Serves 4.
*My adaptations:  To make cooking easier at the campsite, I put the green onions, the olive oil, lemon juice and salt and pepper in a plastic bag.  Once I started cooking, I put the couscous in the boiling water, letting it sit and fluffing it with a fork, I just needed to dump the contents of that bag into the pot of couscous, open the can of pre-chopped olives (4 0z.) and crumble in the feta.  Clean up consisted of one pot and a serving spoon.
Keep an eye out for other blogs in July to complement the camping theme.  Bon camping!
Posted by Joie de vivre at 5:23 PM 1 comment: