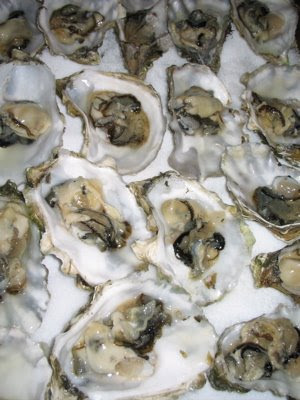 In honor of Valentines Day, I thought I'd include a recipe for oysters.  Long considered an aphrodisiac, these little morsels are high in minerals, low in calories, and really not very expensive.  I bought 18 large Pacific oysters for $8.79 from my local fishmonger today.  If you have never prepared oysters yourself, they will take a little bit of practice, but you will find the effort well worth it.
How to Shuck Oysters
To begin, it is imperative that you obtain an oyster knife.  An oyster knife is a small blade, shaped like an arrow head, with a shield close to the handle to protect your hand (kind of like a fencer's sword) Last year, I tried shucking oysters with a flat screwdriver because I lacked an oyster knife.  Eventually, I was able to open the oysters, but it took all of my strength banging them against the counter, shell shards flying all over the kitchen, I'm really surprised I didn't slice open or puncture my hand with that screwdriver.  What was I thinking?  Tonight, I used a true oyster knife and was able to shuck twice as many oysters in half the time with hardly any shell shards outside of the towel I was using to protect my hand.
After you obtain your oyster knife and have purchased your oysters, you are ready to start shucking.  Gently clean each oyster with a scrubbing brush under cool water.  Place a folded up tea towel in your left hand and place the oyster in your left hand on top of the tea towel with the point of the oyster facing you.  In the point of the oyster, you will see a small place where the two halves of the shell are slightly separated (it is not big at all).  This is the hinge of the shell.  With the oyster knife in your right hand, place the point of the knife in this hinge.  FIRMLY press the knife into this space, wiggling back and forth, up and down until you break the hinge.  After you break the hinge, the two halves of the oyster will separate slightly, but there is still a strong muscle holding the halves together.  Take your knife and work it around the oyster until you cut through the muscle.  Once you cut through, the two halves will separate.  Now, you will only need to keep one half of the shell (the one that is most bowl like).  Separate the oyster from the shell on both halves and place them into that shell.  Pour the oyster liquor into a small saucepan and place the oyster shell onto a prepared cookie sheet that has a thick layer of salt on it to prevent the oyster shells from rolling.  Continue shucking all of the oysters, plan on 6 per person.  When you are finished shucking, here is a simple way to prepare them if you're at all squeamish about slurping them down raw.
Broiled Oysters with Lemon Zest by Joie de vivre
Serves 3
Ingredients:
18 oysters on the half shell (6 per person)
The oyster liquor from the oysters
1/4 cup white wine
sliver of butter
lemon zest from 1 lemon
Directions:
1.  Place the oyster liquor, white wine and butter in a small saucepan.  Bring to a boil, then strain into a large measuring cup with a pouring spout.
2.  Pour a small amount of liquid into each oyster shell.
3.  Broil the oysters for 3-4 minutes.
4.  Sprinkle a little lemon zest over each oyster.
5.  Eat immediately with fresh bread.  Yum!

Email ThisBlogThis!Share to TwitterShare to FacebookShare to Pinterest
Labels: oysters

Oh I so miss living on the coast!! I could live on raw oysters with a bit of lemon and shaved horseradish!

I have never tried oysters but my mom loves them!

Here my hubby loves pysters, but i don't like them.

Love your new digs. What a pretty site! I really like mussels over oysters and need to make those very soon and we love to dip our bread in the broth. Mmmm!

I love oysters, but they're not readily available in the shells where I live. I often buy the smoked canned kind because they make a nice snack. I also love a good oyster burger every so often and there's a place in a nearby city that does a decent one. Mmmm...

Cooked oysters are so good! You can just pop pop pop them in your mouth.

I got my new address a couple of weeks ago. Blogspot was supposed to automatically direct it over, but now it is giving that yes/no screen. I just put up a note reminding everyone to change their links. Is that what you got when you clicked on the link you had for me?

Thanks for being such a loyal reader and commenter!

I never had fresh oysters before. Looks good.

I love every kind of seafood and these oysters are so appetizing. And they go very well for Valentine's day.

hav heard so much..but had it only once or twice,.that too small ones..back at home..looks good here..:)

So very well done. I love oysters raw, but they are often under appreciated simply broiled. I think you have just inspired me to b;og oysters this week. Thanks GREG

Being a chef and once the only one at an event that knew how to shuck I went through 1500 of the 3000 they had ordered, lets just say my hands hurt for days...

Oh you are so speaking my language on this blog...yum num num yum!

The ultimate aphrodisiac! But I must admit, I love them battered and deep-fried. Sacrilege, I know, but a remnant from living in the South.

Ohhh, I wish I could find some fresh oysters for Valentines Day - we love them!

Wow oysters are cheap where you live, they're almost £1 each here!!

I would love to try some though, I suppose I'll just have to stump up the cash! I love the new look site.

I'm scared to eat these, Amanda! Although I might be more inclined to try them if their battered and deep fried!!

what a great appetizer, and timely too for this valentine's day... lol... :)

I wish I could get such fresh and lovely oysters here! THey look so delicious!

Glad you mentioned getting an oyster knife. It's can't be too sexy on Valentines with a bandaged-up hand. I could eat these all night!

oh how I love oysters. I've never made them, but I order them quite often.