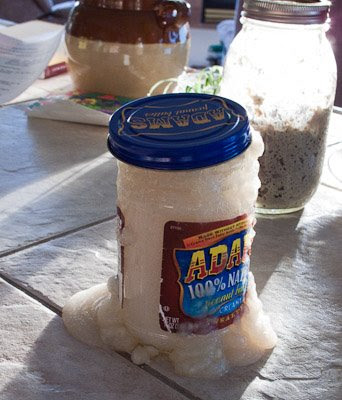 Last Thursday evening, I was given a very precious, precious gift.  An Adam's peanut butter jar filled with a sourdough starter that Rich, one of my fellow choir members, has had going for the past 20 years.  Twenty years!  It felt so covert, he secretly passed me the jar after practice and I gasped in glee, knowing what it was.  He was trusting me with what he calls his "pets" (and sometimes he even calls them his "babies")  I knew that if he was giving me a sample of his pets, I must be a responsible baker in his esteem.
Along with the pets, came feeding instructions and a few recipes.  I decided to follow his recipe for sourdough pancakes (which turned out great by the way) which I needed to start Friday night.  I mixed up the required amount of starter and flour and liquid and set it aside, then I continued reading the directions, "Now is the time to feed the starter."  I had just bought potato flour (the preferred meal of the pets) that day from the health food store, so I was ready.  I put in 3 Tbls. of potato flour, 3/4 c. sugar and filled the rest of the jar up with water as the recipe stated.  Then I started shaking it up.  "Huh," says my faint mental alarm, "Why is it a different color?  And why is it so thick?" I was thinking, as before I fed the starter it was white and very thin.  I then re-read the ingredients, mashed potato flakes, sugar, water.  "Mashed potato flakes?  Uh-oh, did I kill the pets?  Will I never be considered a trusted baker again?"  I followed the rest of the recipe deciding to see what the pets would do before I confessed to the mistake.  The last instruction in the recipe said to crack the lid on the jar to let the pets breathe overnight.  Fortunately, I read that direction.
In the morning, I found that the pets had loved the new food so much, they were overflowing the jar and running down the counter.  (You can see the pets above, my wild yeast rye levain is watching with contempt from the jar in the background) I took the overflowing contents, put them in a quart sized Mason jar, added some more water and again let them sit a bit.  They flooded out of that container too.  After another 8 hours or so (and spooning bit by bit out) I felt they were finally settled down enough for me to put them in the refrigerator.
The next morning, I saw Rich at church.  He looked at me expectantly.  "I made sourdough pancakes on Saturday."  "Oh yeah, how were they?  Were they light and fluffy?"  "Yes, but I mis-read the recipe when I was feeding them (the concern and panic immediately showed on his face and I could tell he thought the news that I had killed his pets was coming) and fed them potato flour instead of mashed potato flakes.  They bubbled out of the container and all over my counter."  "REALLY?" he exclaimed, barely containing his glee, "They REALLY liked it!"  He was practically giggling!
Rich is so excited.  His pets have found a home that they like, and my trustworthy baker title is saved.  I'm sending this one over to Susan at WildYeast for her Yeastspotting event. 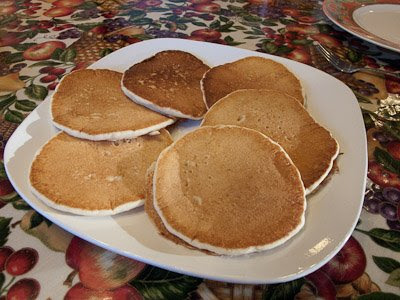 Sourdough pancakes adapted by Joie de vivre from Rich B's recipe
The night before making the pancakes, prepare the following mixture for the "sponge" in a large bowl.  Cover with Saran Wrap and leave on counter overnight.
2.5 c. all-purpose flour
3/4 c. thick potato flour sourdough starter
2 1/2 c. warm water (95 degrees F)
In the morning, add to the "sponge":
1 Egg
1/4 c. dried milk powder
2 Tbls. vegetable oil.
Stir well.  In a small bowl, mix together:
1 tsp. salt
1 Tbls. baking powder
1 Tbls. sugar
Sprinkle the dry ingredients over the wet ingredients and gently fold into the batter.  Let the batter rest while you heat your griddle to Medium-high.  Scoop batter onto the griddle using a 1/3 c. measuring cup.  Cook on one side until bubbles burst and edges start to dry, flip over and cook until browned.  Makes about 24 6-inch pancakes.
Posted by Joie de vivre at 5:30 AM

Love reading about the dough story.
I always make thin pancakes, never had thicker ones.
Looks yumm.
20 yrs in the choir that is indeed wonderful.

wow - 20 years?? I wish I knew someone who had a starter going like that. I keep contemplating starting my own but never get around to it.

I am so saving this! I have declared it to all who will listen: I am Pancake Woman! And I love sourdough pancake. My MIL gave me some wonderful starter several years ago that I nursed for over a year but had to give up to another home when my husband and I had to move and I wasn't sure it could handle a cross-country, multi-day car trek. I think it's time to start one again! Thank you for sharing!!

Sourdough pancakes! How yummy! Definitely have to try these!

sourdough pancakes is such a neat idea. they look delicious.

i'm glad you liked new moon. it was my favorite book out of the series. after i read it, i also felt like bella didn't deserve edward!!! she was with jacob the whole time!!! as you read the series, you'll start to feel that way even more haha

have you listened to the soundtracks and the music from the movie? i have both of them and they are great. you can listen to them on youtube, too.

My dad used to make his own sour dough starter and I have his recipe although I have not arttempted to make it yet. He made so many wonderful breads, biscuits, cake, pastries and yes pancakes too! You have a gold mine in that little jar!

This is a great story! I never tried this when I was a young cook with kids, because it always sounded like so much work, but Kudos to you! I found a recipe I want to make, but it called for sourdough starter, and I do not know any cooks here, lol

Love it I have a brother in-law who raised sour dough until my sister said enough it stinks to bad, your pancakes look great.

whoa, how cool. i want friends like yours! all i get is maybe a bottle of wine here and there.

also "yeastspotting" made me laugh... i'm like a 10 year old at heart.

I had a good laugh reading this. Those pancakes looks so yummy.

What a story...and picture! We've got to do a bit of research on starters because it sounds so interesting.

Heh, that's great. I need to get some starter, I have a sourdough orange chocolate chip muffin recipe that my dad used to make when I was a kid. They are the best muffins, but since I'm not really into sourdough bread I never have starter on hand.

These look so good! One of my friends brought me some sourdough starter once - I kept it alive for awhile, but sadly, it died.

Those pancakes look positively scrumptious. I'm sure those pets will live a long and happy life with you, can't wait for more pet inspired happenings.

So glad you had postive results. These sound delicious. My mom had a starter for a while. Once we get settled it is something I definitely want to tackle. I love sourdough bread!

Sourdough starter......I am so jealous. Lucky you.
Sam

What a cute story! I don't think I've ever had a sourdough pancake. They sound really good!!

Lovely pancakes...will be so good with maple syrup.

Oh, these look SO good. I love anything that's made with sourdough starter. The texture and fragrance it creates is just wonderful. Will definitely be making these AND the rye starter. Thanks a lot for sharing.

Fun story, and beautiful pancakes. Sourdough pancakes are the ONLY pancakes as far as I'm concerned.

wow, 20 years! What an honor!
I love they way you wrote about it.

What a wonderful gift! :)